Better late than never, here is the six song for this month. Life has been hectic and busy, but we’ll be back with more very soon. Also, I recalled incorrectly about the name of Matthew Good’s upcoming album, but you can read Rebecca’s blog post about it here to get more info. In the meantime, enjoy the tunes and rock out with me. Yeah!

Man do we ever love a good rock show. When I heard Sparta was coming back into town I immediately arranged another interview. Not only are we huge fans, but the guys in the band are so talented and down to earth. A couple of weeks later, the band rolled through town and played none other than the Fabulous Commodore Ballroom here in Vancouver. Jim Ward, subject of our last interview, was under the weather but when we went back stage and saw Keeley and were not disappointed. It was great to talk to the latest member of the band, contributor on their new album Threes, hear about his side projects and impressions of our fair city.

The park is cleaning up from the mess that was caused from the December 2006 storm. We made a trek to see how things are going, especially since a lot more of the park has been cleared of obstacles on the trails. The best part was the tree that we encountered in the last video podcast. This time it was cut in a half and we were surprised to find that someone actually took the time to calculate the rings to determine its age. And yes, once again, another cellphone capture.

In case it isn’t stamped in your date book, today is the day to Bum Rush The Charts. If you want more info about it, read this previous post on the subject. 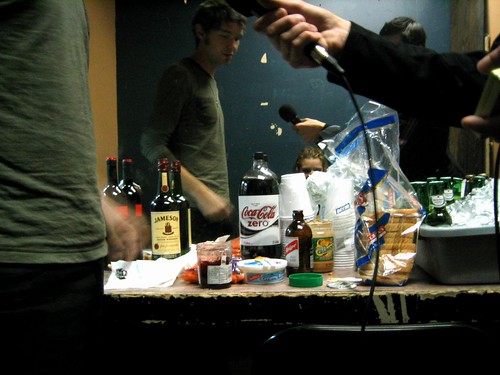 We’ve done it before and we’re doing it again. We’re really happy to announce that we’ll be interviewing Sparta at their upcoming show at the Commodore, March 30th. It was such a pleasure to meet Jim Ward last year. He’s very intelligent, insightful, opinionated (in a good way) and sure can belt out the tunes.

Last November we had the pleasure of interviewing Jim Ward from Sparta for our podcast, RadioZoom [Episode #118][Miss604 Blog Post][RZ Blog Post].

You can check out the archived episode and if you like what you hear, either Jim’s point of view, his like of sushi or yes – the tunes – then you’re in luck. Sparta is coming back to Vancouver on March 30th, playing the Commodore [HOB]. I know a lot of people were upset that the last show at Richards on Richards sold out so quickly so here’s your chance.

Check out Episode #118 to hear our last interview with Jim Ward, and for more RadioZoom band meet n’ greets browse our “Interview” category. If you haven’t yet picked up their new album Threes I highly recommend you do so as well.

All IODA, all SXSW. This is a direct sampling of six artists from the IODA SXSW Opening Day Bash. I caught wind of this the other day and thought it would make for a great episode for this month’s six song. You might call it lazy, but I explain more as we go along. By the end of this one, I hope you find new music and new reasons why you should check out SXSW

(Cross-posted from my personal blog)

I’ll try to break it down as simple as possible, but you can get the long end of the story here. On March 22nd, the goal is to get an independent music artist to the top of the iTunes music chart. To do this, podcasters and enthusiasts alike have picked out who that would be and their particular song for this event. On that day only, the intent is to get everyone, that possibly can, to buy that song from the iTunes Music Store.

The song: “Mine Again”

The purpose of this is to “prove the power of new media more than showing corporate media that not only can we exceed their reach and match their purchasing power, but that we can also do it AND make a positive difference in the world. If we can succeed with this small example, then there’s no telling what can do next.” (As quoted from the website)

The curious thing about Black Lab is that they were on a major label, only to get dropped. They have since moved into the independent realm of creating and promoting their music, adapting podcasting into their efforts. Therein lies a lot of the inspiration and consideration for choosing them for this effort.

I ran around the apartment with my minidisc and microphone to record this one. Rebecca was preparing to head over to the island for the weekend with some of her family(girls only), so I followed her around while spouting off about various topics. I tore into a can of Guinness to find out what those things they put in there look like, we give our review on the Northern Voice conference that occurred last weekend, and give a roundup to the Vancouver Podcast Meetup that Mark Blevis, of the Canadian Podcast Buffet, put together last Sunday. Other hilarities included.

Music links (All tunes from the IODA Promonet)

(Cross-posted from my personal blog)

As a regular listener to the Canadian Podcast Buffet, I was excited to hear that Mark Blevis was coming out to Vancouver on a business trip and wanted to conduct a meetup with fellow podcasters. This will be happening at TC Lions Pub on February 25, 2007 at 8:00 PM, in downtown Vancouver. Mark asks that you RSVP for the event at Upcoming.org.

As I mentioned in my post about NorthernVoice, that is the same day as my first year anniversary, so I doubt I will be able to make it. We’ll probably be pretty sauced by then.

Update: Change of plans. Rebecca and I will be there.

There’s really a lot that we talked about in this episode, so much that we only threw three songs into this one. Rebecca gives a review of her Amazing Hunt experience, we cover a variety of things coming up, look ahead to NorthernVoice 2007, there’s a podcast meetup in Vancouver, and we round it out with Vancouver Trivia. There were a variety of technical issues in this as well, but I didn’t edit it out.